A Waffle is Like a Pancake with a Syrup Trap 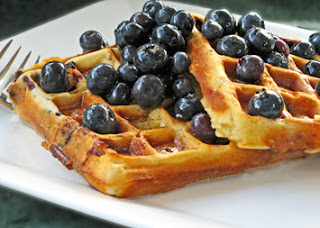 Or a blueberry trap, or a deliciousness trap, because really, whatever’s getting trapped in the waffle’s grid is bound to be good. And that’s what makes waffles one of the smartest breakfast foods there is; a waffle sees a good thing and it holds onto it. It doesn’t let a good thing slip away like pancakes do. Silly pancakes let precious maple syrup slide away without even fighting to hold onto it. Not waffles though, they hold on tight. 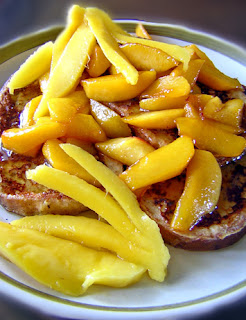 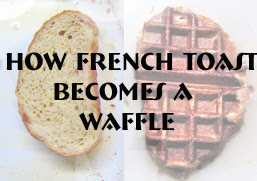 As wonderful as that French toast is, (especially French toast in bed) I couldn’t help but think it could somehow be made better. The problem with French toast remains that, like the pancake, it simply can’t hold onto a delicious topping the way waffles can. Until now. Of course it was none other than Dorie Greenspan that brought this idea to my attention, why not make waffled French toast? It has all the benefits of French toast plus the best part of the waffle; the trap. Genius. Pure genius. I took a regular French toast recipe, stuck it in the waffle iron and voila! It was transformed into waffled French toast that was perfect for holding cooked cinnamon apples and maple syrup. 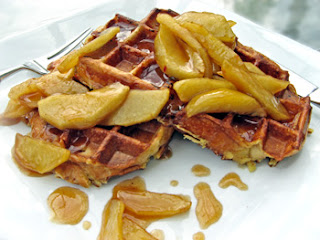 1 cup fresh blueberries, (or frozen, do not thaw)

Preheat waffle iron. If you want to hold the waffles until serving time, preheat your oven to 200F.

Melt the butter; reserve. In a large bowl, whisk together the flour, baking powder, baking soda, cinnamon, and sugar. In another bowl, vigorously whisk together the yogurt, milk, eggs, and vanilla. Gradually pour the liquid ingredients over the dry ingredients, whisking until they are just combined. Fold in the blueberries and melted butter.

Spoon out ½ cup of batter, (or amount recommended by your waffler’s manufacturer onto the hot iron. Smooth the batter to the edge of the grids with a metal spatula or wooden spoon. Close the lid and bake until browned and crisp. 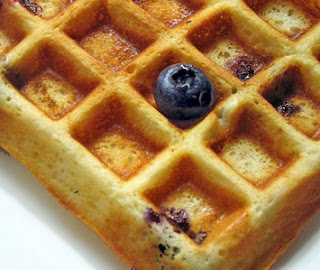 I seriously love waffles, and since Dorie can do no wrong, you'd better believe I'll be trying out this recipe. :)

Oooooooooooh I got to get me a waffle iron

Oh my oh my You are making me delirious!! These look good. I especially like the idea of making the French toast into a waffle!

In Hawaii, there used to be a restaurant that made waffle dogs, they encase the hot dog with condiments of your choice into the waffle! Delish!

OoOOo, I think a waffle iron may go on the list of "needs".

French toast is my favorite! I will have to try this twist:) You and Dorie are simply genius:)

It's confirmed - you are a baking genius. I love the French toast waffle idea. Want it now!

What a great idea - so of course it came from Dorie, who else?
I had waffles with fruit for breakfast this morning but those look so much better than the ones I had.

Heehee, I love your description of the waffle being a syrup trap!

Oh, how I wish I had some of those right now!! I shouldn't have skipped breakfast this morning - my tummy is growling!

heehee; my kids would love this post. I need to print it for them to read!

Wow, all of the above looks absolutely amazing... How I wish I had a waffle maker with me here in the dorm!

Whoa. Too many good things at once. Brain. Overload.

I love love love French toast. I may need to find myself a waffle iron...

Until I read this post, I could think of no reason to buy a waffle iron. Now I'm thinking... waffle French toast sounds irresistible.

Brilynn you have got the word right there.
Genius! from all corners. I will always take a waffle over a pancake. My problem with pancakes are they are not finger food like a waffle can be. I will be trying this idea. Thank you so much.

I wish I had a waffle iron. I really like the idea of french toast waffles.

I love your description, you are so right. I always prefer waffles over pancakes...not only it traps the syrup, it also traps the butter. Now that's HOT (well, imitating Paris Hilton). Hehe.

I agree - genius!! I have also always found pancakes' slipperiness to be a problem, leaving a lake of syrup behind... I own neither a waffle iron nor Dorie's book, but I fear I may not be able to live without either for much longer!

I didn't even know Dorie had a breakfast book out! They look seriously good. Too bad a waffle iron has a singular use and I can't bring my conscience (or my wallet) to get one!

How ever clever of you to make a quickie waffle with french toast! All the toppings you have there are so delicious. I love waffles but I don't have a waffle iron in Sydney. Many years ago, I bought one for my mom but it became a white elephant. We only used it whenever I was around.

Oh, how brilliant is this idea! Waffles made from French toast...this is reason enough to add a waffle iron to the ever growing list of kitchen things I must have! And the blueberries...and mangoes...can it get any better?! And I love "a waffle sees a good thing and it holds onto it!" That's too cute...and too true, I have to agree. :-)

Simply fabulous! What a great idea. The best of both worlds!

I wish I had a waffle iron!

I'm going to have to make some more waffles soon, your pics are fab, look at those blueberry waffles, mmm mmm!

If you can go to Paddington market every saturdays, you will have the most beautiful waffles you have ever tried. They make them fresh right in front of you and you can choose the toppings. My favourite is the one with real belgian chocolate (not the awful topping you get anywhere else). Go and try it is worth it, it is divine