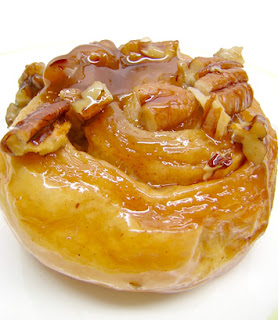 When presented with last month’s Daring Baker challenge, I had a decision to make: I could make sticky buns or I could make cinnamon buns. For most people this wouldn’t have been a big deal, just pick one and make it and you’re done. But I suffer from decidophobia, the fear of making decisions. This makes the simple task of choosing one recipe over the other extremely difficult. I would have rather been told which recipe to make and therefore avoiding any decisions whatsoever. Eventually though, because each Daring Baker challenge has a deadline, I ran out of time and hastily chose to make the cinnamon buns. Shortly after the decision had been made and so had the cinnabuns, the aftereffects began to set in. You see, whenever I finally make a decision, I then find out all that is wrong with that choice and how much better the alternative would have been. In the case of the cinnamon buns, they were good, (well, at least the four I managed to save from the fiery pit of death that is my oven were good) but when I saw the sticky buns everyone else had baked, I began to doubt my decision. Clearly the sticky buns would have been the superior choice. Everyone raved about them and how delicious they were and here I had chosen to make the cinnamon buns. Curses! Foiled again! 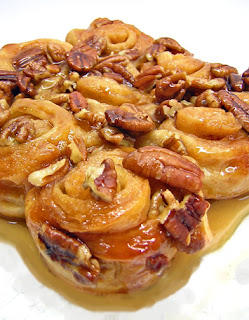 So my brain’s been in sticky mode ever since. I keep thinking about how I should have made sticky buns. I should have done a lot of things. Instead I tried to think of other things, to distract myself from the sticky buns. Eventually I realized that this was one of the rare times that my original decision didn’t prevent me from making the second one as well. Nothing was stopping me from making sticky buns except my own stupidity. What’s more, Dorie has a recipe for sticky buns that I’ve been drooling over since December. If that wasn’t a sign for me to make them, I don’t know what is. 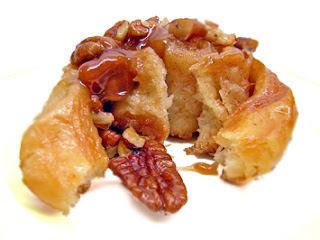 And wouldn’t you know it? Dorie’s Pecan Sticky Buns were definitely better than my burnt cinnamon buns. They were ooey and gooey and sticky and wonderful, everything they should have been. It makes me think I should adopt a George Costanza like philosophy, like in the classic Seinfeld episode where George realizes that his instincts are fundamentally wrong, and vows to "do the opposite":

George: Elaine, bald men, with no jobs, and no money, who live with their parents, don't approach strange women.

Jerry: Well here's your chance to try the opposite. Instead of tuna salad and being intimidated by women, chicken salad and going right up to them.

George: Yeah, I should do the opposite, I should.

Jerry: If every instinct you have is wrong, then the opposite would have to be right.

I am glad you did not resist baking them. My parents asked for them one more time before returning home this morning and I spent the evening and night with mom making them and drinking tea. They look fantastic!

this is great! it is good that you tried both sticky buns and cinnamon rolls.

I´m so glad you decided to give these a go! And I´m sure you are too... now just make sure to have people help you eat them, otherwise, slowly step away from them, they are very, very dangerous.

Great sticky buns! And I loved the Seinfeld comment.

Glad you decided to make the sticky buns too. They definitely look sticky, gooey creamy and chewy. Right up my alley! ;)

I think you did brilliantly, they look absolutely scrumptious, and it makes me want to bake some more of them. I also loved the quote from Seinfeld.

I have to stop reading this before breakfast -- now all I can think of is sticky buns! Those look wonderful, and of course great to know that Dorie's recipes come through once again.

Those sticky ones look fabulous and make me wish I'd chosen them over the cinnamon.

after reading all of last month's daring bakers posts, i've been tempted to make the sticky buns too. in fact i signed up for the daring bakers, starting this month, purely because of how delicious they looked. yours are just as scrumptious looking. someday very soon i'm going to buy dorie's book so i don't have to feel left out every time you don't post your recipe ;)

I am glad you tried the Sticky Buns too! They look ooey gooey and oh so good!! I like the Seinfeld reference too:)

I love your decideabphobia. We reap the benefits by seeing your great creations. I am so jealous that I didn't get a chance to participate in that challenge. Those are some amazing buns. :)

Clearly, saying yes to sticky buns and Dorie is the right deciision. They look just perfect. I'm glad they're not in my house right now or we'd all gain ten pounds.

I can definitely relate to your decidophobia, but I'm glad that you able to make it work for you and drive you to create such delicious looking sticky buns! Now if only my inability to make decisions lead me to such a sweet ending...

I have decidophobia too - well at least I think I do!! Those buns look ooey gooey delicious. I can't imagine a Dorie recipe not being delicious.

u are right , these do look better than the cinnamon buns ! really really delicious :)specially with the pecan nuts.

Win you over did they! and you and Dorie score again! Sticky is hands down the winner!
And they really have a name for it even, decidophobia, far out!

This is making me remember those amazing sticky buns. And I was drooling over the recipe in Baking with Julia. Dorie's description has me wanting to give them another go...YUM!

Those sticky buns look amazing! I am really going to have to get around to trying to make both the sticky buns and the cinnamon buns.

I should go back and make these too. I too just did the cinnamon buns. Those look killer.

I'm glad you gave it a go, now you don't have to think about what if?... I read Dories recipe after doing the DB's ones, and they sure look yummy!

That's so funny, Brilynn...decidophobia! I know what you mean though...I made the cinnamon buns, and I loved them, but the sticky buns were tempting me with every click of the mouse! Your Dorie Sticky Buns turned out beautifully...now I'm craving them too!

Wow these look so delicious! I made sticky buns a couple of weeks ago after seeing them on DB blogs, and now I'm thinking I want to make them again!