The Bigger They Are the Harder They Fall 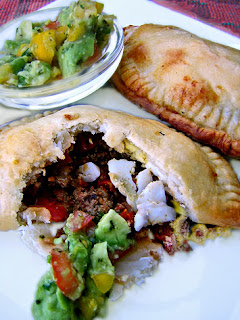 I know some people look forward to the arrival of fall, (a certain , for instance) and can’t wait for the change of season. Now, I have nothing against the season itself; I like the cooler weather, I like when the leaves change colour, I like pumpkin pie. But I don’t like fall. That’s because fall has always signified the start of a new school year, new beginnings and changes. I was never one of those kids that looked forward to school, quite the opposite, I dreaded it. The last couple weeks of August were always bittersweet. On the one hand, it was usually gorgeous weather and there was lots of fun to be had. But on the other, it was the end of summer and that meant saying goodbye to freedom. Overnight I would go from playing outside all day and staying up late, to getting up early and being stuck at a desk doing mindless drudgery. It was a shock to my body every year. And somehow, the arrival of September still has a negative effect on me even though I’m no longer returning to the classroom. When the back to school ads start coming out, the mall becomes packed with moms frantically trying to find their kids a new pair of gym shoes and the big yellow buses can be seen creeping around, I get a little queasy. My heart beats faster, I sweat even though it’s not hot and I’m constantly looking over my shoulder, just waiting for the school year to jump out of nowhere and shock my body into a new and uncomfortable schedule. I can see it happening to others and I walk on tip toe, trying to hide from it. Even though I’m not going back to school, fall still brings changes and new beginnings. But what gets me the most is that I don’t know what they’ll be and that makes me suspicious of everyone and everything. If you see me walking around with shifty dog eyes, it’s because I’m still waiting for the changes to hit me, out of nowhere, just like the new school year always did. 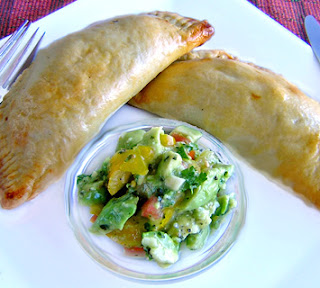 One thing that I know will stay the same is my Go Big or Go Home motto. And in order to ensure that, I thought it was about time to remake my namesake: Jumbo Empanadas. It’s been over a year since I made them last and that’s far too long ago, so when Stephanie of Dispensing Happiness announced that the theme for this month’s Blog Party was It’s What’s Inside, I knew the time had come. As if that wasn’t incentive enough, the September issue of Gourmet magazine is a showcase of Latin American food, including empanadas.

Cook onion in olive oil in a heavy medium skillet over medium heat, stirring frequently, until softened. Add garlic, cumin, oregano and chili pepper and cook, stirring, 1 minute. Stir in beef and cook, breaking up lumps with a fork, until no longer pink, about 4 minutes.

Add raisins, olives, 1/2 teaspoon salt, 1/4 teaspoon pepper, and tomatoes with reserved juice, then cook, stirring occasionally, until liquid is reduced but mixture is still moist, about 5 minutes. Spread on a plate to cool.

Preheat oven to 400°F with rack in middle.

Lay a large sheet of plastic wrap on a dampened work surface (to help keep plastic in place), then roll out an empanada disk on plastic wrap to measure about 10 inches. Place meat mixture on disk and top with 2 slices of egg. Moisten edges of disk with water and fold over to form a semicircle, then crimp with a fork. Make more empanadas in same manner.

Combine an egg yolk and a little water and then brush this mixture over each empanada before putting it in the oven for about 20 minutes or until empanadas are golden brown. 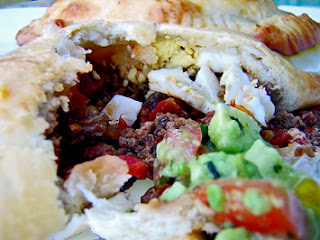 Bring all incredients except flour to a boil. Add wet ingredients to flour and mix to incorporate. Knead to a firm dough. Divide into 2 disks and refrigerate 2 hours.

Brilynn - I absolutely love Latin food and those empanadas look yummy! Thanks for the heads up, I can not wait for my Gourmet mag. to arrive!

Brilynn, I love your empanadas! I always look around for good empanadas recipe, and I trust your judgement so this recipe is on my to-try list.

qué sabrosas--yum! and i'm so impressed that you make your own dough...i've alwasy completely cheated on that and bought goya. i'm with ya on the sight of school buses, btw.

And see I love back to school stuff. I don't even teach anymore and I buy school supplies each year. It's a sickness. My husband says I have the largest collection of Sharpies he has ever seen. :)
Your empanadas look mighty tasty!

Brilynn, these look so good. Wish I could have one.

Aaaaah, they look so delicious. Man, this reminds me that I haven't made empanadas in a looong time. Time to revisit them, I think!

Ah, I've been waiting for jumbo empanadas to show up here again! Bueno!!

These look delicious - I will be trying this recipe.

I just had beef empanadas last sunday at my sister-in-law's house. Hmmn...your recipe looks awesome...I might just try it.

Joao is gonna love these, Bri - if it's stuffed with beef he's in for some!
And I love the dough, too - gonna make some for me, using different fillings.

These empanadas look amazing!! But I have to say - I'm with Peabody. I love Fall and look forward to it!!

WoW!
Trust you to have the best empanadas=D

Fall is absolutely my favorite seaosn, but I'm like you and not a big fan of change. The empanadas, on the other hand, look fab.

Brilynn, I hadn't seen your recipe for empanadas before. They look soooooo goooood!!!!I'm impressed with everything about them!!!I still look forward to fall.(Please don't throw things at me...wink..wink...) Even when I was kid I lived far from my friends at school, so back to school was a time to reconnect!!!

Yum. That looks sooo delicious. It's time to fall for empanadas!

I've not managed to get lunch today, oh am I hungry now :)!

Wow! They look heavenly! And I had no idea the dough was so easy to make.. I'm so on these!

And seriously.. I think the only changes you'll be in for will be for the good. =)