More Proof that Going Big is the Only Way to Go 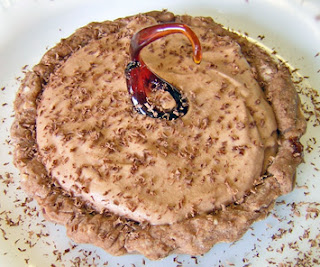 When Veron of Veronica’s Test Kitchen and Patricia of Technicolor Kitchen announced that the recipe for this month’s Daring Baker challenge was a Milk Chocolate and Caramel Tart, my thoughts went something like this: Yay, there’s chocolate! Boo, it’s milk chocolate, no dark. Yay, there’s caramel, I love the taste of caramel! Boo, I hate making caramel, it always tries to attack me and my kitchen. Yay, I have a family reunion coming up that I can bake this tart for! Boo, I have to work that day so I’m going to have to send the tart with my parents for everyone to devour but me. Yay, it’s sunny outside! Boo, there’s something sticky on the bottom of my foot, ew, what is that? Yay, I like the colour blue. Boo, I distract easily and have no clue where I was going with this. 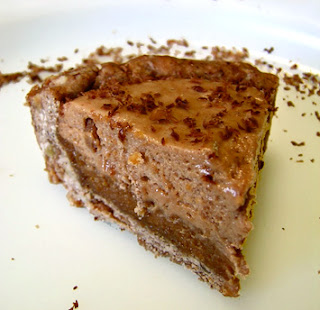 Anyways, I made this tart without too much sweat and without dropping any curse words either, which generally isn’t the case with a Daring Baker Challenge. I had no trouble rolling out the crust, but I heard the crust drove some of the other Bakers to the brink of insanity, or as close to the brink as a failed crust can drive someone. The caramel process went smoothly, quite the opposite of most of my caramel making ventures, I didn’t even scald myself with the hot sugar like normal. The chocolate mousse was apparently without incident because all I can remember about making it was licking the bowl. And yet, despite the relative ease with which it was made, I wasn’t overly impressed with the end result. I made two tarts, one regular sized that was shipped off to my family reunion and one baby tart that I kept for myself. I only tasted the baby and I don’t think this tart worked well in the mini version. There was too much crust and not enough filling. And the filling was what this tart was all about. It claimed to have a chocolate crust, but with a measly 2 tablespoons of cocoa powder in the crust, it was hardly chocolately. With such an uninspired crust I should have known all along not to make a little tart that was dominated by crust. 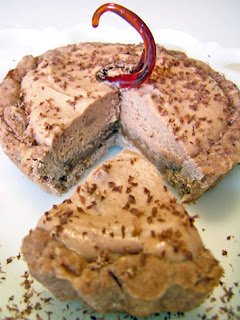 This just proves my ‘Go Big or Go Home’ theory because from what I’ve been told by those who sampled it, the results of the large tart were quite fantastic. Although I didn’t get to witness this myself, Mom tells me they were lined up for a slice of tart and there wasn’t a crumb left on the plate. You’ll have to take this with a grain of salt though as Mom has a tendency to exaggerate, and by exaggerate, I mean she makes stuff up. I often tell her I’d rather be criticized than receive false praise, but I don’t think she believes me because even when I make something I don’t like, she still tries to tell me it’s great. And then I feel like bashing my head into a wall out of frustration. I almost want to feed her something that’s purposefully bad, that’s simultaneously too salty, sour, sweet and hot all at once just to hear how she’ll try to describe what she thought of it without offending me...

Don't forget to check out all of the other Daring Bakers' posts, links can be found from the DB Blogroll and the original recipe will be posted on either Veronica's or Patricia's blogs.

Yes, this was definitely one of our easier challenges. And you didn't even have to turn it into ice cream...though I'm sure that would have tasted good!

Oh, peabody, ice cream made with this, GULP!
Now...Brilynn, spill the beans how on earth did you get to roll this dough? When's your master class on rolling shitty dough?
Love the way your mousse looks in this one! Great job!

Nicely Done Brillyn. The tart realy was delicious. Next time be sure to keep the big piece for yourself! :)

I agree the dough was a bit shitty to roll so I too want to know what you did! It looks awesome though and a very arty-farty decoration!

Oooh, I like your tart's caramel hat! Looks awesome. I didn't really have any trouble with the crust either (I had to patch up the sides a little, but rolling it out was easy for me).

I especially love the caramel twirl on the top.

I really need to find out why the dough rolled out easier for others! Mine was greasy one. You did a great job with the tart.Simply decadent. I agree that minis will be hard with this one because of the crust...

Yeah, I too want to know how your dough behaved so well - mine was absolute misery. Oh well. Great caramel decoration, too :)

And yes, the beans on the dough need to be spilled!

Bri, your tart looks wonderful! I love the caramel hook you placed over it. I'd steel it while asking for my slice of tart.

And about your mom... I know many people would like to have such a supportive parent!

May be that the crust dominates but they are so PRETTY! Brava!

Excellent job with the Daring Bakers challenge. I am in denial about sweets these days and trying to cut back..so this means I will just have to drool over all the Daring Bakers triumphs....but hey, I could invite friends for dinner because then I make dessert!!!Someone slap me quick I must be hysterical.

Your tart is definitely a BIG success Brilynn! I love the caramel curlicue!

The caramel on top is great!! Your posts always make me laugh, BTW. I wish this would have been so easy for me!!

I love your "go big or go home" theory, because I have a tendency to head that way as well. But your tart is way cute and I LOVE the art on top!

I get that from my parents too, particularly my dad. I agree that a bigger version is better with more filling per crust, but your baby tart is very cute. How did that you make that gorgeous caramel swoosh?

There was no way to know that this particular crust wouldn't be the best for miniatures. But that just reinforces your 'go big' mantra.

My mom is brutally honest which is a blessing and a curse.

Love your caramel decoration and Peabody's suggestion of ice cream - It would make great ice cream. I found it too sweet but in ice cream I think I'd love it.

A walk in the park and your tart looks cool with that free form caramel. I agree that the crust doesn't qualify as chocolate, but mine turned out OK, too. Your post is wonderfully funny as always. Go big every time...and maybe consider the ice cream idea...bet you could make a knockout milk chocolate - hazelnut - caramel ice cream.

Love your caramel curl on top.

Large is the only way to go with tarts like this! Loved the post and love the caramel decoration! Here's to a relatively straigtforward challenge ... bring on September!

I am loving your caramel decoration.. it looks like a sculpture! =)

Another challenge under our belts.. can't wait for next month!

Beautiful tart! I only made me minis and was not too much impressed either, now you make me want to try a large one!

No curse words from you?? Darn you, you really are a domestic goddess. And I looooooove your sugar swirl on top!

Love the color of your caramel layer. It looks fantastic!

So far you're the only person I've read who had ease with the dough, so congratulations! Your tart looks great, well done.

What a fantastic job! I love, love, love your caramel garnish, So original! xo

This tart sounds like it would be wonderful! Sorry that it wasn't so much.

Such a funny post Brilynn. Shame the baby tart didn't deliver, but at least you had an easy time making it. Love your caramel curl!

I laughed at your "mother making up stories" My mother is the same. She would imagine scenarios just to make you happy. Go Brylinn, Going big is the way to go.

I love your caramel decoration! How cool is that! Nice work! Glad you saved a taste for yourself though!

The big caramel swirl on top makes the whole dessert have a cartoonish feel. Cute.

Hehehe Mothers sometimes lie, don't they? Of course I would never do that to my children..... hehehe
I found the flavor changed after a day, so maybe your big tart really was amazingly good after the travel?
The mini looks great!

so cute with the caramel kiss! great job on the tarts!!

Yes, I'd like to sign up for the dough rolling class! Interesting idea about the big tasting better because of less crust.
I did like this one, even the milk chocolate. I think/hope I have my missing text present and accounted for.

I adore that top knot! So darn clever! And the tart looks lucious!

NO curse words? Is that sort of thing allowed? ;-)

That is a great looking tart and one impressive swoop of caramel - well done! And I *loved* the yay/boo paragraph :P

I love your baby tart with the caramel cowlick!

Love the big dough hook decoration. Was that supposed to be an Ode to your Kitchenaid?

You have a lovely blog, I'm glad I found it.

I love your swirled caramel topper. So artsy-it almost looks like blown sugar. Your tart looks great and I am glad it went smoothly. What a nice mom you have!! Wendy

It's interesting to see how each of the components come together slightly differently for each baker, despite the fact that we're approaching the same recipe with the same set of ingredients. That's what makes this fun!

Bri, yup! You don't have to go home!! That is one big puffy tart!