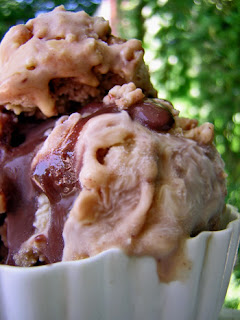 Sugar High Friday has returned this month to its creator, Jennifer of The Domestic Goddess and she’s decided that the theme is your favourite, most craved dessert. This is an easy one. What dessert can count chocolate, caramel, cheesecake, cookie dough, strawberry, mango, vanilla, cinnamon, rum and cherries among its ingredients? Ice cream of course! Hey, I never said all of those ingredients had to be contained in one flavour of ice cream, although that’s not such a bad idea… Some people reserve ice cream for a special treat only once in a while. I pity the fool who only has ice cream on certain occasions. Not a day goes by that I don’t have a spoonful (or 12) because the day’s not complete without my favourite sugar fix. It doesn’t matter if it’s 30 degrees below zero or 30 degrees above, ice cream is always a necessity. And since it comes in so many flavours, I never tire of it. If I overdose on chocolate, (ha, like that will ever happen, but if it did) vanilla and kiwi are lined up at the gates, ready to take its place. I don’t think there’s anything I couldn’t turn into an ice cream flavour, if something tastes good on its own, I can only assume it tastes equally as good, if not better as an ice cream flavour; bacon, I’m looking at you here… 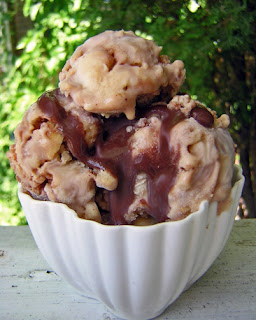 This is my very own ice cream recipe that I made after someone left a comment on one of my posts, (that of course, I can no longer find) saying that the Team Cookies would be good in ice cream. Thank you to whoever that was because I’m forever indebted to you! I didn’t want to make a vanilla ice cream with team cookies in it, but rather an ice cream that incorporated all of the flavours of the cookies, (chocolate, peanut butter and oatmeal) into the ice cream itself. This recipe was the result and it’s deliciously decadent. Go big or go home.

In a small sauce pan, combine 1 cup milk, the oats, a pinch of cinnamon and 1T brown sugar. Bring to a boil and then reduce heat and simmer until the oatmeal has absorbed most of the milk, and looks like a runny oatmeal. Remove from heat and set aside.

In a heavy bottomed saucepan combine the remaining milk and the heavy cream and bring to a boil.

In a medium bowl, whisk together the egg yolks, sugar and peanut butter until well blended and uniform in colour. While still whisking, pour in a quarter of the hot liquid to temper the eggs. Continue whisking and slowly pour in the rest of the liquid. Return the entire mixture to the pan and heat over medium heat until the custard is thick enough to coat the back of a spoon.

Remove from heat and stir in the cooked oatmeal mixture and vanilla.

Put mixture into the fridge to cool completely.

Pour into and ice cream machine and near the end of the cycle, just before it’s ready, pour in the peanuts and chocolate sauce.

Sounds yummy. What a great combination of flavors, but no recipe?:(

Can't wait for the recipe!!!

Not fair! You're teasing me with no recipe!

You know we share the same obsession with ice cream. And then you go and stick those amazing cookies in it. I love a woman with an evil mind!!

jealous, so very jealous of the ice cream maker. these look so good, sniff

Sooo tempting, one bite and I'd be done!
The photo is great~ I can taste the chunks. Thanks for the experience!

Hi Brilynn I'm a long time reader, first time commenter. I love your blog. At the mention of kiwi ice cream I wanted to warn you away from a mistake I made (and ruined ten beautiful kiwi and some gorgeous greek yoghurt in the process). But you might already know this: you need to heat the kiwi before adding them to milk products (otherwise your ice cream will taste like bile). They contain an enzyme that rapidly breaks down milk proteins. This enzyme can be denatured by boiling for a short period of time. Just thought I'd mention that to ward off anyone else having the same horrified reaction I had when tasting my kiwi yoghurt and wondering what went wrong.

Oh wow - this looks amazing!! I, too, am an ice cream lover. The best was when my sister worked at a ice cream place and she would bring home ice cream with tons of different mix-ins - I was in heaven!!

Oooooohhhh YUMMAY!!!! That sounds wonderful......even though it's midwinter here in South Africa!!! Interesting comment from Sheila about Kiwi's and milk! Thanks :)

You should make a bacon-peanut brittle or bacon- chocolate ice cream--that would be brilliant!

Oh YUM!!!! If I hadn't packed my ice cream machine - I'd be upstairs right this minute!

Wow, sounds delicious. I think the idea of using cooked oatmeal (as opposed to oat flakes) is very clever.

Oh I am so excited that my comment inspired this delicious looking ice cream. If only I could make my way from Ireland to Canada to share a bowl.
This has made my day, hurrah!

Stupendous! I need to make this - today!

What a clever idea Bri...excellent!

We need to buy an ice cream maker. You're totally convincing me, LOL!!!

All my favourite ingredients in an ice cream? This sounds (and looks) too good to be true!

O-M-G - that ice cream looks AMAZING....i LOVE your team cookies, so can only imagine how good this is!!! Speaking of cravings, now I'm craving this!

I wish I could dive into that ice cream right now! At least I have the awesome recipe! :D Thanks Bri!

Oh my! That looks sinful.

That is one outrageous ice cream recipe!!!

come on help us make it!