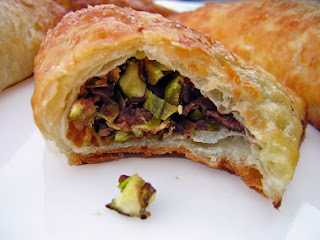 A while ago I made cherry danishes and was thrilled by the results. In what can only be described as a moment of sheer genius mixed with restraint, I froze half of the dough to use at a later date. Then it sat in the freezer, cold and alone with nobody to love it for two long months. I hate to see suffering of any sort so last night I rescued my danish dough from the frigid depths of the freezer and let it thaw out on the counter. I had no real plans for the dough but I thought I would try something other than danishes. Turnovers seemed like a logical second choice, apple turnovers. But not just any old apple turnover, an apple turnover with maple caramel from Bill Granger’s Maple Banana Upside Down cake. I was pretty excited about the whole thing but managed to mess it up when, instead of pouring the caramel over the apples, I dumped them into the pot and tried to combine the two. The result was a watery, (apple-juicy) maple caramel sauce that couldn’t be contained by a turnover. So I changed my strategy, drained the apple chunks out of the sauce and decided to call them “maple caramel soaked apple turnovers.” I ran into another roadblock when I realized I had way more dough than filling. I improvised with frozen raspberries. But I still had leftover dough so I chopped up some pistachios and bittersweet chocolate and used that as a filling too. The final two squares of dough were treated with the remnants of the chocolate and a little scoop of peanut butter. All of the turnovers were brushed with an egg wash and sprinkled with sugar before baking to perfection. Perfect for breakfast, lunch, dinner, snack or dessert. Anytime is turnover time. 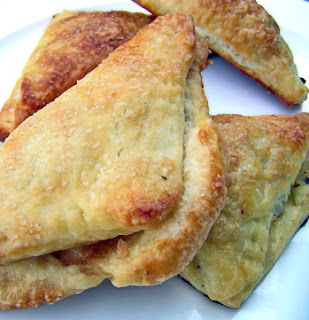 Labels: Baking, Chocolate, Fruit...sort of, Sweets of All Kinds

Improvising is the best way to success and all of these sound truly delish!

You call that improvisation? I call that to be a genius. You did a really good job.Do you think I can have some of them...now for breakfast?

I wish these would turn over and show up at my house. (I am full of bad jokes today).

*sigh* looks better than the toast I had for breakfast!!

Please send some over my way!!

You can improvise in my cupboard anytime!

Well it may have been a winding road to get there but they look fab!

I really need to learn to be creative with my leftovers as you are, too many times perfectly servicable bits have gone into my bin because I had no idea what to do with 'em :/

Sounds like you had delicious treats for breakfast! I have some leftover dough in my freezer - maybe I'll take your lead...