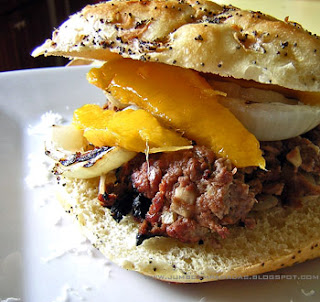 When Freya and Paul of Writing at the Kitchen Table announced that they were hosting Big Burger Ballyhoo 2007 I immediately said that I would participate. Of course I didn’t do anything right away but I often thought about what kind of burger I would make, most often around lunch time when I’d say things like “I need to make burgers.” But I didn’t. Then I realized the deadline for burger making was today so I got down to business. I don’t have a favourite burger recipe so I winged it. All I knew was that I felt like a burger with an Asian flair so that’s what I made. Or tried to. My burgers were too small, (how on earth did that happen???) and I didn’t grease the grill so instead of flipping effortlessly they sort of fell apart. The recipe has potential, but it needs a few more trial runs before it’s worthy of joining the ranks of the other creations being submitted to the Big Burger Ballyhoo. Nonetheless, I’m providing you with my hodge-podge of a recipe in the hopes that it will inspire you to create something better.

For those of you who having been wondering when bbq’d rhubarb would make an appearance, the answer is not today. I tried it out when I was grilling the burgers and the end result was less than stellar, or edible. I had plans of grilling it and then drizzling some reduced balsamic over top with a sprinkling of fresh parmesan. It wasn’t worth wasting the balsamic and parmesan on. I had hoped that the rhubarb would retain some of its firmness when grilled but what I got was complete mush. Next time I’ll be significantly reducing the grilling time. If you’ve had success with grilled rhubarb, let me know.

Cut the steak into one inch chunks and pulse briefly in a food processor. You don’t want it to turn to mush, just to be broken up a bit. Dump the meat into a bowl and mix in all of the other ingredients. Cover and refrigerate for 1 hour. Form into patties and grill on a greased bbq.

*Note- For some crazy reason I made 4 patties out of this, I should have made 2. And while you’re grilling the burgers, I advise grilling up some thick slices of Vidalia onion too.

The rhubarb sounded like it had potential ... too bad that didn't work. Maybe it still has some promise.
Looks like a good burger.

They may have been small, but I'll bet the flavor was good. As for the grilled rhubarb, maybe putting it in a foil packet with the balsamic would work??

There's nothing wrong with a finger sandwich...unless it has real fingers in it. I think these look great! I'm pretty excited by the black bean sauce. That's brilynnt! I never would have considered it, but it makes perfect sense.
Good luck!

The black bean sauce is a great idea. I usually end up making my burgers into Indian style kebabs or something. I'll give yours a go sometime though. :-)

Is that mango in the burger? Black bean sauce is such a great idea! Making burgers on Monday, I think I'll have to do an Asian style too...maybe Hoisin sauce?

I agree with what elle said above for the rhubarb. Maybe grill the rhubarb over very high heat for just a couple of minutes until grill marks form, and then put in a foil packet with the balsamic to braise it until your preferred doneness. I've never tried that with rhubarb, but I did the same technique with baby bok choy and it turned out pretty good.

My stomach is growling, pass the burgers please!

I love burgers with vidalia . . . I bet your combination would be great with salmon or tuna burgers also.

You have inspired me to start thinking about making my own mince! I always buy ground meat from the grocery...I'll try doing it in my food processor next time like you've done here :)