It Could Have Been Made By Your Grandma 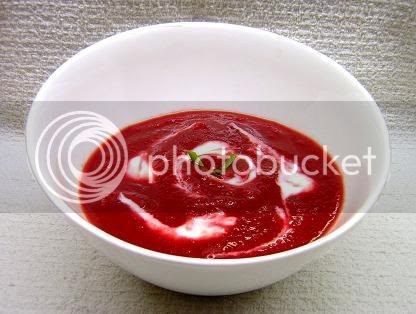 Borscht. Doesn’t it just sound like something a Grandma would make? I thought so and that’s why I decided to make it for this month’s Retro Recipe Challenge. This is the 4th installment of Retro Recipe Challenge and the specific instructions were to make a favourite fall dish. And what says fall more than a colourful thick soup? It’s perfect to take the chill out of the air and warm you up on the inside when the temperature’s dropping outside. I found this recipe hand written in one of Mom’s old cookbooks. I have no idea where it’s from or who wrote it, but I assume that means it’s old. It’s also vague. For example, I interpreted “herbs” to mean bay leaf, thyme and a little bit of cumin seeds. That’s just what I felt like putting in. I also like puréed soups, so I instead of thinly slicing the veggies I diced them and then blended the whole thing before serving. I love the colour of the borscht and how it looks with the sour cream swirled in.

Peel and thinly slice beets, carrot, onion, apple and potato. Add them to melted butter in a large pan. Cook until they begin to soften a bit. Add stock to cover, lemon juice and herbs. Bring to a boil and reduce to a simmer. Simmer until veggies are soft. Laddle into bowls and serve with sour cream.

Oh, Brilynn! It's so pretty! How could anyone resist a bowl of that?!!!

Delicious. I'll pay homage to my wife by blogging a Polish version (Barszcz) sooner or later.

the colour of the soup's such a lovely red! i'm not a big fan of beets, but if you served me that and not tell me it was beets i would gobble it up and be none the wiser :)

When I looked in my blog reader pane, I though this was Ketchup ;)

Hi brilynn, I have a borscht recipe in my cookbook too...it looks just like yours...but I think my recipe had red cabbage in it too...anyways, will give it a try sometime soon :)

Borscht eh? I've never been tempted to try it, but all those pretty colors ARE swaying me to your side....

This entry reminds me of my fiances grandmothers soup. He's of Maltese origin and (correct me if I'm wrong, I can only speak VERY basic Maltese) is called Soppa ta' l-Armla. Which we know as "broad-doo". It sounds silly in English but makes perfect sense in Maltese. haha! You also crack raw eggs into it just before serving. It sounds gross but is to die for!

Another lovely dish with beautiful colour. Nice one! <3

Bri, excellent job! Will give this soup a go when I can buy buy fresh beets! :)

I LOVE THIS! Yum yum!

what a beautiful color of red you have! this is slightly different bortsch version than what i've eaten on russian's potluck. but you've done a great job interpreting the "herbs" thing! :)